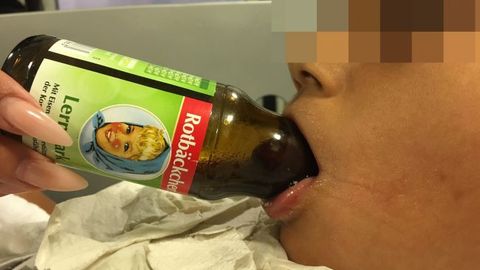 The European Journal of Anaesthesiology

When a 7-year-old German boy recently got his tongue stuck in a juice bottle, his mom took him to the emergency room because she couldn’t dislodge it. Usually when this happens, doctors will anesthetize a patient and cut off the item, trapping the tongue. But this time, a doc on the case remembered a hack he’d previously used to open a bottle of wine when he couldn’t find a corkscrew.

No, doctors didn’t bang the boy’s head against a wall until the bottle came loose, thankfully. Instead, they applied a shot of air through a cannula into the bottle. And it worked.

Lead study author Christoph Eich, M.D., of Germany’s Auf de Bult Children’s Hospital, says doctors should try this method before jumping to anesthesia. “Positive-pressure proved to be a simple, effective and safe technique for releasing a tongue entrapped in a bottle,” Eich said in a statement. At first, doctors tried inserting the cannula between the boy’s tongue and the bottle to let some air out of the vacuum that had formed inside, but that didn’t work. Then, Eich remembered what he did when he had to improvise to crack into a bottle of wine.

Eich and his team fashioned a pump using the cannula attached to an IV tube and an empty 20 mm syringe. It took a couple of pumps, but eventually the pressure freed the boy from the bottle.

This is exactly how air pressure wine bottle openers work: They pump air into the bottle that forces the cork out, as seen in the video below.

The boy, who had to stay in the hospital overnight for observation, suffered a swollen tongue that was discolored for days due to capillary damage, but he fully recovered within two weeks. 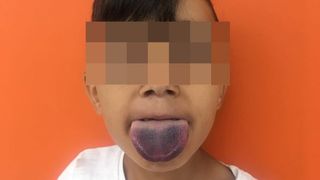 The European Journal of Anaesthesiology

Tongue entrapment is pretty rare, but when it does happen, it usually involves children who are oblivious to the danger of their tongue becoming stuck. If this happens, it’s best to go to a hospital for treatment as strangulation is a risk due to edema and ischemia of the tongue.

If you want to see an air pressure bottle opener in action, or you just need some extra corkscrews for backup, try these:

Why People Are Trying the Dirty Vegan Diet

How to Know if You’ve Been Bitten by a Tick

Do You Need to Take Vitamin D Supplements in Wintertime? Here’s...

A Friendly Reminder From The CDC To NOT Eat Raw Cookie...