Most days, I’d be packing up my gi and getting ready for the advanced jiu-jitsu class. But COVID-19 being COVID-19, the dojo, along with everything else in Brooklyn, is closed. The roll gates are down and the chalkboard, bearing inspirational slogans, is folded up inside. And so I sit at home, watching old matches on FloGrappling and pining for the mat—but not all is lost.

After a few years of Brazilian jiu-jitsu training, the so-called “jiu-jitsu spiral” is what’s keeping me sane and it isn’t the first time it has saved my life.

By my mid-30s, I had spent decades either on the mat or in the ring, moving from the more peaceful martial arts towards those of increasing violence. I started off with Aikido, then transitioned to wrestling in high school, then, as an adult, boxing, and ultimately Muay Thai, perhaps the most violent of striking modalities.

What drew me to the squared circle and a brutal sport like boxing is there’s very little middle ground. You punch or get punched. Muay Thai is even better. You can punch, knee, elbow, clench, and kick, too. Of course, that means being the object rather than the subject of those verbs, which hurts. These disciplines are glorious zero-sum games, a world of black-and-white, or rather black-and-blue.

Though boxing and Muay Thai can be wonderfully transformative endeavors and hard sparring a baptism, I came to realize that what drew me to both was related to my borderline personality disorder, a mental illness with which I was diagnosed in 2018. 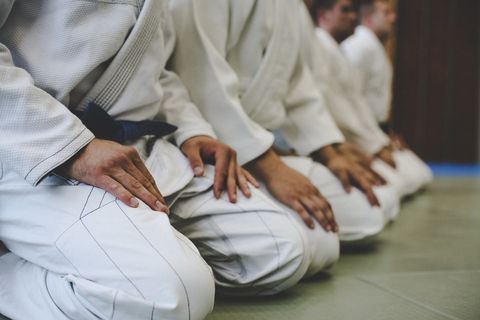 This comported with both boxing and Muay Thai in which exchanges last just a few strikes. Though long-range game plans exist in the higher echelons of the sport, in the types of sparring I was doing, you had only think of this punch and the next. Good. Bad. Good. Bad. Three minutes on. One minute rest. Repeat until you can’t anymore. It was nasty, brutish, and short—exactly my cup of tea. But out of the ring, you don’t have to have BPD to see how this might fuck one’s life.

That all changed when I started Brazilian jiu-jitsu three years ago. BJJ, as it’s called, is a relative of judo, though one equipped with an array of joint locks and submissions and concerned not simply with getting an opponent to the ground but also what one does once there. It has, along with the rise of mixed martial arts, exploded in popularity in the last few years. Unlike striking arts, BJJ is made up of long molecules of technique.

None of this I knew when I first bowed onto the mat at my local dojo in Brooklyn. Instead, I brought with me my penchant for zero-sum, black-and-white thinking, carried from fighting, both on the mat and off. Suffice to say, it did not go well. For a long while, I, like many white belts, insisted on executing my techniques, whether it be the rear naked choke or an arm bar, using brute strength if I had to.

On the flip side, when I did roll with someone more technically skilled than I was (not a difficult thing to do), I often found myself in positions from which no amount of strength could free me. Frequently, this occurred after I had insisted on a technique even as the conditions that made it appropriate shifted. It was immensely frustrating and I routinely left the dojo feeling disheartened.

In fact, nothing was working itself out. Not at the dojo or out of it, The limits of black-and-white thinking were increasingly clear. Around this time, my marriage fatally ruptured, thanks not exclusively to BPD, but exacerbated by it.

“I couldn’t help but draw some sort of connection between life on and life off the mat.”

Career-wise, one job ended, another one started, and that ended, too, but without a replacement. My credenza filled with unused and obsolete business cards. Bridges were burning like it was Dresden, and as my fortunes ebbed, the rocky floor of my explosive anger proved dangerous terrain for my family. And with every episode of dysregulation, I sank deeper. I couldn’t help but draw some sort of connection between life on and life off the mat. I was, without a doubt, being submitted.

But I kept on training because, well, what else was there to do? Week after week, rolling with an array of bodies and skill levels, I naturally absorbed more techniques, counters to counters, counters to others counters, etc. It felt like learning a new language, first nouns then verbs then adjectives, enough to say a sentence, enough to have a conversation.

As my arsenal of techniques grew, I found my level of panic decreased. I realized that what I had thought was the end was actually a potential new beginning. That which I thought was bad—or good—was actually neither. It simply was an opportunity, a doorway, a comma, not a period. I had begun to discover what my teacher called the jiu-jitsu spiral.

Soon, that began to spill off the mat too. There was no doubt that my life had gone sideways. After the divorce, what I had always feared had finally come true. I was well and truly alone. I was, in other words, ready to tap out. But what if spirals are like nautiluses: naturally occurring.

Just as how, on the mat, an arm bar once was an end but now just another position to move through. What if sitting on my couch bummed as hell listening to David Berman wasn’t the end, either, but just another beginning? What if I could broaden my emotional vocabulary beyond high contrast dichotomy: good/bad, black/white, win/lose—to see the shift of circumstance as a play of light, a subtle spread of hue? It is, I admit, a rudimentary awakening, almost embarrassing in its simplicity, embarrassing that it took me 38 years to realize. But we don’t choose our spots for satori and mine happened on the mat.

Which brings to right now, the closed dojo, on the couch again whose cushions don’t soften the reality that the only certainty is that each of us will be touched by loss, submitted by fortune. And even though the mat for now is beyond my reach, the lessons I learned I carry with me. This sorry state is simply a position, a position to move through. It’s the terminus. It isn’t forever. It’s workable. In other words, every counter has a counter and the spiral never ends.

GaryVee Has a Brand New Hustle

You Can Still Go Skiing at These U.S. Ski Resorts

This Is How Football Player Taylor Rapp Burned 10,000 Calories in...

Watch Dr. Pimple Popper Pop a Cyst Out of a Tight...